The History of Staplers

The History of Staplers

Just about everyone owns a stapler. Many own more than one. They are used at the office, at home, and even in medical settings. When a package is delivered, there’s a good chance that a stapler helped to seal that package. This makes it one of the most common and most useful tools that we have on the planet today.

There are also many different types of staplers. From staple guns to pneumatic staplers that provide air-powered options, this tool can help everyone meet almost every need they have to put two things together. Even though most people own or use a stapler today, this is a remarkably recent invention. The first known stapler appeared in France in the 1700’s.

Check out our all together more modern staplers in our extensive review on the best manual staple guns available today here.

Ever since the invention of paper came about, humans have been trying to find ways to bind those pieces of paper together so longer documents could be formed. Inventive folks have used everything from glue to ribbon to wax to help make papers be able to stick together.

It wasn’t until King Louis XV wanted to have an easier way to bind documents together did the first actual stapler become invented. According to the stories of this invention, the staplers that the king used took the place of his wax seal. They were made from gold, bore his royal insignia, and some may have even had precious stones on them.

Will you marry me? Here’s a beautiful diamond engagement staple…

Let’s face it: having staples that cost more than the average person’s monthly income isn’t a good product to mass market. In 1866, the idea of what a stapler could do would permanently change.

Some will point to a fastener that was patented in 1866 as the first “true” stapler. Invented by the Novelty Manufacturing Company, it could bind paper together with a binder that was like a staple. The problem was that it could only hold one staple at a time and it wouldn’t actually fasten the staple to the paper.

Around the same time, an inventor named George McGill received a patent for a paper fastener that was bendable. The next year, in 1867, he received a patent for a machine that would press this fastener through paper. His stapler hit the market for the first time in 1869. Even then, unfortunately, stapling was still a labor-intensive process because it had to be constantly reloaded.

It wouldn’t be until 1895 that the first stapler that we would recognize as a “modern” stapler came about. This was invented by the E.H. Hotchkiss Company and it used a long strip of bendable staples that were wired together. It was such a popular invention, in fact, that people referred to a stapler as a Hotchkiss.

In Japanese, the word for “stapler” is actually “hochikisu.”

The Stapling Revolution of 1937

As with many inventions in the late 1800’s and early 1900’s, the competition to improve the product was intense. Many inventors were receiving patents for their own variations of stapling technology. One of those updates came from a company that was a side business effort from a stationery wholesale agent. Jack Linksy would create the Swingline product.

What made the Swingline Speed Stapler #3 such a revolutionary invention? It was because a row of staples could be easily inserted into the machine so it could be used. Past staplers required much more manual effort, with some descriptions stating that a screwdriver and a hammer were necessary to make older staplers work.

This design was so revolutionary, in fact, that it hasn’t really been improved upon since 1937. There are certainly different types of staplers today to accommodate many different tasks. You can staple wood together with a staple gun just as effectively as a Swingline stapler can staple paper together. The medical field uses staples to bind together large injuries so they can heal. The installation of flooring, roofing, and even drywall can be accomplished through modern stapling technology.

What will the future of stapling be?

Sometimes a simple idea can be profound enough that it never really needs to be updated. With bendable metals formed into staples that can be driven through 200+ pages of paper and virtually any other material with pneumatics, maybe someone in the future will be able to improve upon this technology.

Until then, you really could say that the modern stapler is one of the world’s most perfect inventions.

Looking for a modern stapler, and not one from the 1930’s? Check out our favorite electric staplers right here.

Chuck is from Durango, CO and he is a carpenter with 20 years of experience. ​He has a passion for tools, especially hand tools, and how they should be used and maintained.

We participate in various affiliate programs, including Amazon, and earn from qualifying purchases. ​For more information, please visit our Legal page​. 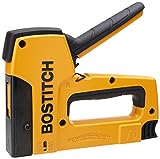 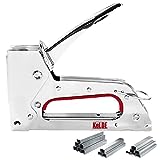